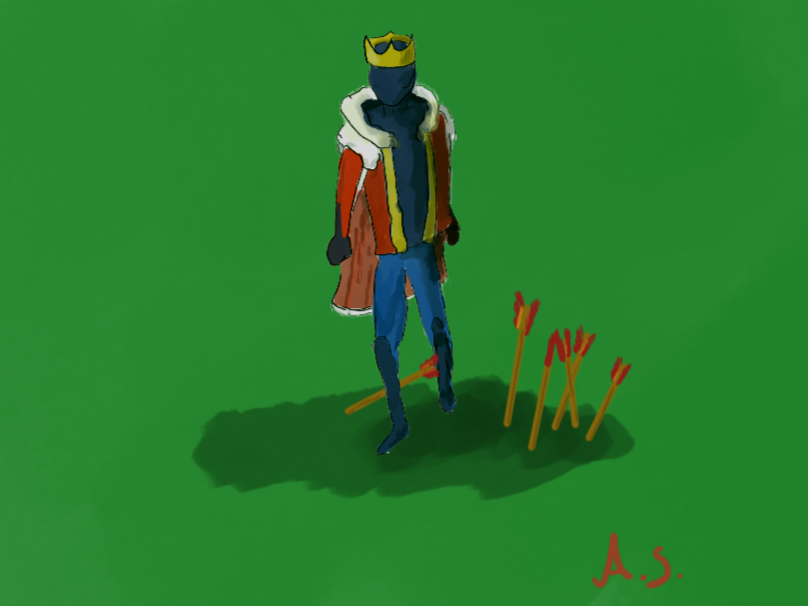 The Battle of Crécy constitutes one of the most crucial battles of the larger pictured which goes by the name “The Hundred Years War”. Taking place in 26th August 1346, Northern France, it marked the end of the knight era. The combatants of the battle were, on the one side an English and Welsh army and on the opposing an army of French, Bohemian, Flemings, Germans, Savoyards and Luxembourgers. The leadership of the English army was distributed between King Edward the third and his son Edward the Black Prince. The commander of the French army, respectively, was the King of France, Philip the VI.

Armies composition and equipment
The English army consisted of 16,000 men: 4,000 knights and men-at-arms, 7,000 Welsh and English archers and 5,000 Welsh and Irish spearmen. What’s fascinating is the disproportionally bigger number of archers, becoming the majority of the army. Although the proportions are unusual for the military standards of the era, the reason behind this choice can be understood when taking into consideration a single upgrade in military technology: The Longbow and the destructive power that comes along with it.

Concerning the French army, the exact numbers have not been verified yes. Nonetheless, according to some estimations it is believed to have had 80,000 men. Other sources, however, mention only half of them. It is relevant to note that the French King had amassed 12,000 mounted knights, a huge and lethal fighting force. Taking morale and psychology in a battle into consideration, the sight of all the prestigious knights with their shinning lances and heavy horses must have been, quite literally, breathtaking. To add to this force, the army’s composition also included 20,000 infantrymen and Genoese (from Genova) crossbowmen. In short, while the English were betting on the longbow, the French heavily relied on the deadly charge of their cavalry force: knights covered from head to toe with heavy armor, carrying a lance, a shield, a sword and even a dagger.

Range versus Force
The battle took place in northern France, near the forest of Crecy. King Edward set up his military headquarters, a war camp, upon a ridge near a mill and divided his army into three groups, according to English military customs. Afterwards, he placed his troops on the slope of the ridge in a position from which they were facing southeast. The angle of the slope was just 8% (imagine the settings on a treadmill of your local gym) but was just enough in order to slow down the heavy knights. In addition, with the aim of making the objective of the French knights (reaching and destroying the English line) more difficult, the king ordered his men to construct barriers and barricades.

The English knights fought dismounted and the majority was placed on the right flank of the army under the leadership of the aforementioned Black Prince, the 17-year-old heir to the throne. The main force of the English army, namely the longbowmen, were deployed on both flanks and at the center of the army behind their poles, in an effort to be protected by the charge of the French cavalry. The English were calm, patient and composed. The same cannot be said about the French army, which was closing in, since it was a multinational army. The absence of unity was an important disadvantage in terms of leadership for the French Army.

The Battle started in the afternoon. The Genoese crossbowmen were first sent to weaken the English army. Although a lethal force, under standard conditions, the efforts of the Genoese men were at most average, given that the French nobles did not allow the crossbowmen to rest after an eighteen-hour-long march. As a result, when the crossbowmen engaged in combat, they faced a “storm” of English arrows and were forced to retreat without inflicting any decisive damage. The Genoese were unable to set the path for the French knights. On top of that, the Genoese were trampled by the advancing French cavalry that decided to attack the English face-on.

While the French “wall of steel” was approaching, the Englishmen were praying for their fortune, while preparing their equipment. Once the French were within the range of the English arrows, King Edward ordered his men to proceed with concentrated fire (or mass fire) directed at the first line of their adversaries. The French faced a volley of 60,000 arrows per minute, a severe punishment even against the “the heaviest of the knights”. The few brave knights that were sturdy and lucky enough to reach the English lines were cut down by the English dismounted knights and spearmen. The French Nobles used the same disastrous tactic again and again, ordering frontal charges.

“Let the boy win his spurs“
During the battle, the right flank, under the leadership of the injured Black Prince, faced heavy pressure to the point that it was very close to the verge of crumbling. The consultants of the King suggested sending reinforcements, to which king Edward responded with a historic phrase: “Let the boy win his spurs”. Eventually the Black Prince avoided calamity and managed to win his flank.

After four hours and fifteen unsuccessful charges by the French, the battle ended at approximately 10:30 in the evening. The night did not allow the battle to be continued. The conclusion was none other than a French catastrophe. Although, again, there are no valid sources, it is estimated that the French lost up to 30,000. Nonetheless, the number of casualties among French Nobles was certain: 1,542 nobles perished, a heavy blow for the upper class of French chivalry. The English, on the other hand, lost a fraction, about 100 to 300 men at most. The conclusion of the battle was none other than the fall of Calais, a French town. After the battle the Black Prince adopted the emblem of the King of Bohemia. The three white feathers and the motto saying “I serve” in German is, until today the emblem of the Prince of Wales.

At the end of the day, though, the biggest achievement was accomplished by the tactical revolution introduced by King Edward. The strategic weapon was not wielded by knights; it was in the cheap hands of archers. It shook Europe; the realization that the rich and expensive knights were not immune or impenetrable. In other words, the mythical image of chivalry was now vulnerable, bleeding by the arrows of newer and cheaper military technology.

One thought on “Piercing Rain: Battle of Crécy”