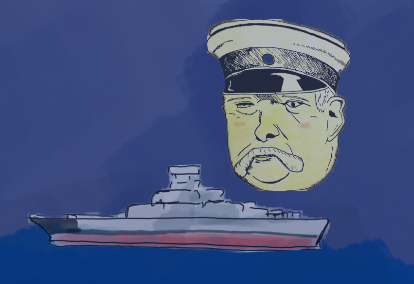 Most people would associate the name “Bismarck” with the father of Germany as the country we know today, Otto von Bismarck. In many instances, communities name streets, squares, institutions and their arsenal after historic figures and Bismarck was no exception. During the Second World War the Nazi Germans deployed their biggest Battleship named after the very same Iron Chancellor.

It was constructed by Blohm+Voss, a shipbuilding company. Although the enterprise was created in 1877, it is still operating to this day with approximately 600 employees. The ship was enormous with its weight reaching as much as 41,700 tons. It had eight SK C/34 guns of 380 mm, with a range of 40 kilometers. The projectiles they fired weighed literally a ton. No wonder that the ship’s mass could reach 50,300 when fully loaded. Given its military capacities, its construction cost back then amounted up to 198.8 million German Marks.

Having sailed from the Baltic port of Gdynia on May 18, 1941, Bismarck’s mission was to break out into the Atlantic Ocean in order to raid merchant convoys of the Allies. Had it succeeded, the battleship Bismarck would have caused a great deal of problems for the Allies. Fortunately, it was sunk only eight after its deployment for its first mission. Despite that, even within the brief period of eight days, it became a nightmare for the allies.

To begin with, the battleship was by default a target of high priority for the English Navy. For the amount of Royal Navy forces it had bound to its pursuit, the duration of eight days was disproportional. The weather and geography were crucial factors for Bismarck’s evasiveness. Although the Royal Navy had tracked the battleship as far as the Norwegian Coast, the huge battleship seemed to have disappeared into thin air.

It was detected days after, and the Royal Navy even engaged in a battle. Although the Germans sunk the British battlecruiser “Hood” and damaged the new battleship, “Prince of Wales“, Bismarck had suffered critical damage; a shell hit its fuel tanks, forcing it to change course towards Brittany.

Eventually, with the assistance of the Royal Air Force, the British engaged, once again with the battleship Bismarck. The Allied forces unleashed a barrage of around 400 projectiles. Given the situation, the Nazi sailors could not stand the possibility of this emblematic vessel being captured by the Allies and decided to terminate the sink Bismarck themselves. On May 27 the Bismarck sunk, and with it its crew of 1,980 sailors perished.

In light of the evidence, it’s quite interesting how the attempt to challenge the maritime power of England and deny its rule of the sea stemmed from a ship named after Bismarck, a persona of German nationalism. Perhaps this name acts as an indicator, that once again nationalism was a key driver for the German war machine and not the Nazi framework itself.

4 thoughts on “The Battleship Bismarck”