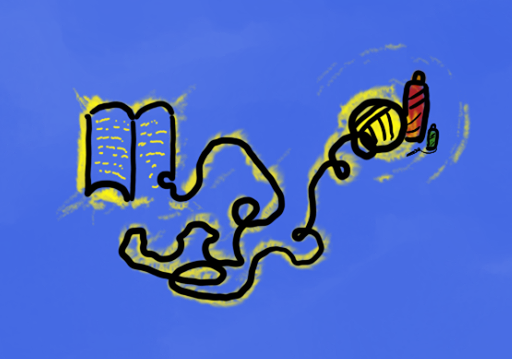 One of the trends we see in modern learning is condensed science. Be it in school, university or YouTube, we tend to explain, or be provided knowledge “in a nutshell”. It sounds convenient. My own Grandfather, an architect wishes it was possible to transfer knowledge with ease. “So much knowledge. It is a pity that this will all be lost the day I die or lose my memory. I simply wish I had a way to take all of my knowledge and inject it into a person’s brain.” he complains from time to time.

Technically, this is why we have books. They echo humanity’s voices in time and space. The book, the written word, spreads knowledge geographically, to the degree that a grand mass of population is educated enough to read it and understand it. To those unable or unwilling to read, many selfless teachers and streetwise philosophers spread the second wave: an oral echo of the story. In terms of time, a written record grants the status of limited immortality. Sure, a deceased person is unable to experience the world. Nonetheless, their ideas do exist as long as they are remembered, read or when they have inspired subsequent work.

In reality, however, books are not easy to “inject”. Not to mention that current books are condensed to a great degree already. Many wonderful academics, as my mentor in university used to say, “I have read a hundred books so that you only need to read one.” One may argue that, of course, there are books whose ideas are easily understood in its introduction and conclusions. A great number of speed-reading advocates actually suggest that in order to truly read a book faster, one would need to quickly browse through the contents, in order to understand its mental skeleton. Having done that, it is considered easier to then read the book and fill in the gaps. Just as anatomy helps with drawing a realistic body, when the artist sketches the character’s skeleton and muscles first, in the same manner, a book is best understood when you have prepared a set of questions and their respective answers you are seeking for.

Regardless of what speed reading can achieve, a great deal can be understood by stepping into the shoes of an academic. Although the ideal academic is exploring ideas and debates, in the reality I have experienced that a scholar is first and foremost interested in the raw material used. Footnotes and references are the single most important currency in the academic world. Some even denounce the validity of a source based on their philosophy and worldview and create their collective accumulation of work and thought. That is quite similar to the historic example of the rebellious hansatsu, a supplementary currency issued on a local level, which could not be banned or contained by the central governing Tokugawa Shogunate in Edo period Japan, despite their greatest efforts. Similarly, many Scholars denounce traditional approaches and aim to create their own academic currency. In the field of International Relations, I would say that the respective group of people are the notorious Constructivists, who base their currency on Social Theory. They then accumulate their ideas, citations and support one another, creating a base of their own for their references, much like a Russian doll of shell companies masking corruption and money laundering.

Do not get me wrong. The work of Constructivists is an interesting read. Nonetheless, the vibe I am getting is that most of it is conducted for the sake of publishing something complex, anything, for the sake of publishing rather than offering a theory of practical and humanitarian value. When the real value however, is not reflected, just as with any currency, inflation will occur. The structure might begin to collapse, which raises the question: Are we truly standing on the shoulders of Giants, and if we are, do Giants collapse? This is my argument against some of the modern work and this explains why many true academics urge us to actually read the primary discourses, in order to be sure that we by ourselves are standing on strong foundations.