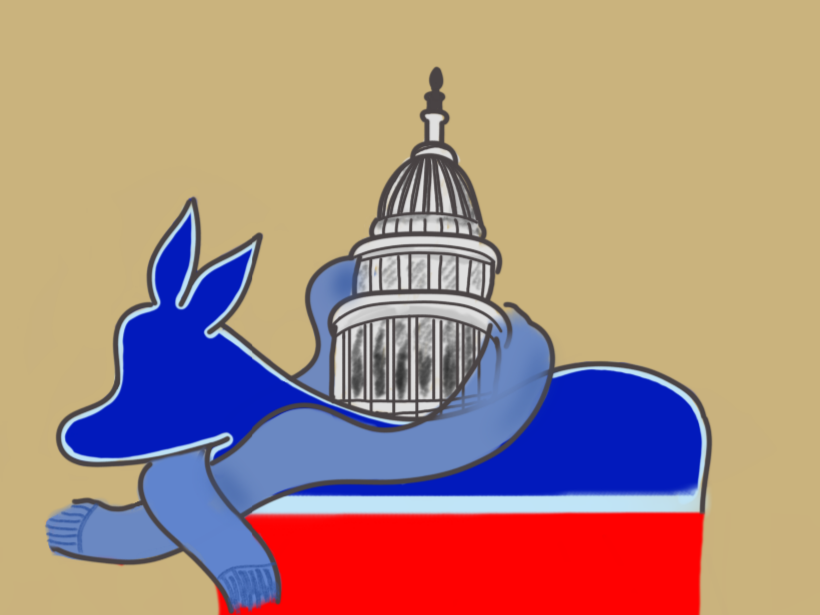 In November 2020, Joe Biden was declared the winner of the 2020 U.S. Presidential elections. Celebrating on stage, once crackers victoriously popped off for a plethora of swarming confetti to embrace the audience, a startled, scared look [1] appeared on Biden’s face. That look, noticeable for a very fleeting glimpse, was telling of a somewhat cautious and fearful victory, in agony of any form of uproar.

The process of these elections, from beginning to end, can be characterized as a rollercoaster. Actually, it was pretty interesting (and refreshing) to see so many Americans vote, [2] considering a previous history of relatively low voter turnout.   Early voting and mail in ballots pushed the procedure forward by a lot. Some voters found a greater significance in these elections compared to the past [3], and thus were propelled to participate.

However, there was no blue wave, nor is there complete trust and serenity in the Democratic Party. In fact, both Republicans and Democrats are expected to suffer from some kind of unrest within their Parties. The Republican Party is facing a much greater challenge, with Trump himself inciting, even illicitly, fragmentation by his actions and overall demeanor. ‘Never-Trump’ Republicans wish to wash him away, but the former President vowing he’ll be “back in some form”[4] renders it uncertain how destabilizing of a factor he’ll become in the long run. On the other hand, the Democratic Party involves ‘new age’, progressive members (like the so called Squad) and people who shake up its establishment, like Bernie Sanders, whose growing, large following and overall movement during these elections should be the least acknowledged.

Evidently, the new President is confronted with a much contested environment. Its climax was presumably the riot of Trump’s stirred up fan base witnessed at the Capitol, at the start of 2021. The Presidential transition was not smooth enough, since the 45th President, until the last minute, refused to respectfully acknowledge the elections’ outcome. No matter the circumstances, Biden has chosen to retain a calm and collected attitude, reassuring that he’ll be President for all Americans.

Indeed, unity is a priority for the new Executive. In his sermon-esque inaugural speech, Biden mentioned ‘unity’ eight times, and characterized it as ‘the path forward’. The word ‘democracy’ was also referenced eleven times (but who’s counting?). Overall, the Inauguration had a ‘Lincolnian’ aura to it. The new President urged Americans not to turn inward, but rather to repair, restore, and heal the country, making it ‘a leading force for good’. [5]

Biden, as Obama’s ‘heir’, will work in many areas as a continuator of the Obama administration; there is no skepticism in that. As an experienced fellow in the political establishment and international arena, his years of Vice Presidency constitute an incredible asset. One might even parallel him with the stature of former President George Bush, who was a skillful and experienced diplomat.  Moreover, Biden made a smart, strategic move by choosing Kamala Harris as his Vice President, with the latter becoming the first woman to ever attain such role. As a duo, they broaden significantly the representation of the American public. Obama had followed a similar tactic by choosing Biden as his Vice President, both with different styles, experience and origins. It seems that opposites can both attract and be attractive.

Democrats have gained control of both chambers of Congress [6] (Senate and House of Representatives), granting the Executive with an advantageous position. That does not exclude bipartisan cooperation, though, as Biden will try to please at times both Parties. No matter what, disillusionment needs to be dispensed. There are two hyperboles, a.k.a., exaggerations, surrounding Biden and Trump. The former is not a savior, hence the idolization of his profile and capacities are futile, and the latter has not utterly blundered policy-wise during his Presidency. For instance, he is generally accredited for his China policy, his urge for a more equal financial contribution amongst NATO allies, and the Middle East peace accord. No backtracking will be needed – Biden will likely mold these areas, with a different debonair, using his predecessor’s footsteps as stepping stones.

Even though most European leaders feel a sense of relief due to the outcome of the elections, they should avoid being overly optimistic. The situation in the U.S. should become a wake-up call for Europe and the NATO alliance. Despite NATO’s desperation for the revival of the Euratlantic relations, here, there is a solid opportunity for both sides to pursue an equal partnership. Most advise Europeans to hold their horses; we do, too. Now, more than ever, there is room for both EU, whose reluctance for strategic autonomy is well documented, and NATO, to become stronger individually. When Stoltenberg spoke about his vision for NATO by 2030 and beyond, he instilled on the premise of making the Alliance even stronger, rather than reinventing it. Nevertheless, the affiliation remains prevalent: in his vision, U.S. is tightly included in NATO, proclaiming that U.S. and NATO are actually doing more things together than several years ago. [7]

At this point, it is useful to make a special reference to the dynamic of Greek-Turkish relations under Biden’s Presidency. The Greeks are aware of Biden’s appreciation for Greece. He has even introduced himself as ‘Joe Bidenopoulos’. [8] That alone does not dictate some kind of favorable approach towards Greece. Stability in the Mediterranean and the Aegean will be the aim, but the geopolitical standing will likely not estrange the U.S. from Turkey, keeping it away from Russia’s bear claws. Not everything will be easy peasy for Turkey, though, considering Biden’s cabinet, and the placement of Senator Bob Menendez as chair of the Foreign Relations Committee. [9]

In short, put simply, with the domestic and foreign policies weighed in an imaginary equilibrium, our estimation is that the new President will be more occupied with domestic affairs rather than foreign affairs (with the variables of chance and the unexpected omitted).  The domestic sphere will probably require harder work, resilience and consolidation than that in the international arena, in order to achieve the desired prosperity and ‘unity’ to the current ‘disunion’.

At the moment, it seems naive to assume that Biden will manage to completely turn things around. Surely, it is highly expected that there will be a return to normal. Maybe Biden’s presidency has a ‘Return of the Jedi’ feeling to it for some. In reality, one might suggest that it’s more like ‘The Last Jedi’.  Balance in the nation will be restored only if its societal issues, like racism and injustice, are fought from their roots. There is an “epidemic”, that of social divides, extremism, populism and fanaticism, and there is an even more pressing literal pandemic to tackle.

Basically, a Biden presidency means that multilateralism and respect for the values represented by international institutions will no longer be frowned upon. His cabinet and the overall domestic institutional functioning – as well as the relations within – are expected to run differently, in a less whimsical manner than that of the Trump presidency. Simultaneously, it feels almost redundant to consider the whereabouts of an American hegemony [10]; the substantial targets now are that of adaptation and restoration, due to disruptive domestic forces. Biden is legitimately the winner of the 2020 U.S. elections, and thus, the new President of the U.S.; yet, only over the course of his term will we be able to tell if he is indeed winning.

[1] The moment discussed is captured at approximately 29:54 minutes, and can be viewed on C-Span’s transmission of Biden’s and Harris’s acceptance speeches after being declared as winners of the 2020 U.S. Presidential Elections, on the 7th of November 2020. Available at: https://www.c-span.org/video/?477916-1/president-elect-joe-biden-vice-president-elect-kamala-harris-address-nation

[2] Americans in 2020 managed to reach a historic high in relation to voter turnout. The Council of Foreign Relations reports that: “More than 159 million Americans voted in 2020: 159,633,396 to be exact. That’s the largest total voter turnout in U.S. history and the first time more than 140 million people voted.” More information can be found here: https://www.cfr.org/blog/2020-election-numbers

[5] The transcript of Biden’s inaugural speech can be found at NY Times website: https://www.nytimes.com/2021/01/20/us/politics/biden-inauguration-speech-transcript.html

For more on the course of Euratlantic relations and the argument supporting the importance of a close Transatlantic cooperation, we recommend the book “The Transatlantic Partnership At A Crossroads: Renewal or Decoupling” by Constantine Arvanitopoulos (Eurasia Publications, 1st edition, June 2019)

[10] The book “The Hell of Good Intentions: America’s Foreign Policy Elite and the Decline of U.S. Primacy” by Stephen Walt (New York: Farrar, Straus and Giroux, 1st edition, 2018), proposes an alternative orientation as far as U.S. foreign policy goes, that of ‘offshore balancing’). In essence, its explanation can be deduced as follows: “Instead of trying to remake the world in America’s image, offshore balancing is principally concerned with America’s position in the global balance of power and focuses on preventing other states from projecting power in ways that might threaten the United States. Accordingly, it calls for the United Stated to deploy its power abroad only when there are direct threats to vital U.S. interests.” (p. 261)