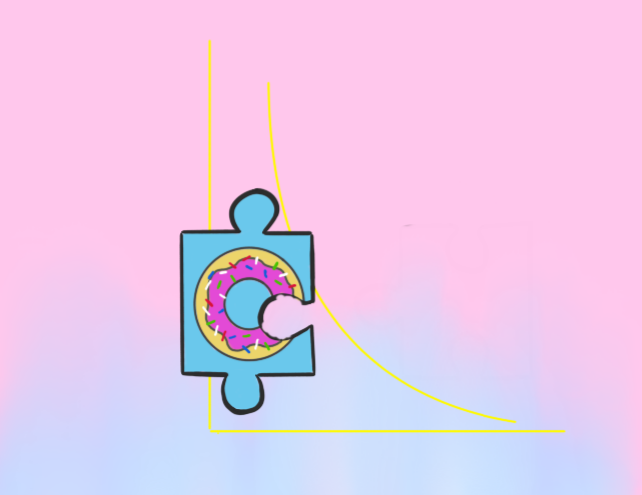 This post is part of the Jigsaw series where we share enlightening excerpts we find in books. Some words and ideas are more impactful when expressed by their writers, as they are.

When I was a child, my mother would often say that mathematics is the global language – not English. This remark had an impact on me, as I understood that there is more to a language than words. The notion of a language can have a broader definition.

I grew up and found myself in a situation where I had to explain microeconomics to a student who came from Norway, half-Greek. He missed all of the lectures. He was bedridden for quite some time. He had a habit of underestimating the cold temperature of the Greek sea in the autumn. While his knowledge Greek was adequate, he was struggling with some of the academic terminology. This is where sketching came in hand. By using our mutual understanding of crafting in video games (armour, weapons, equipment and items), I drew an anvil and started explaining everything around it.

Whatever could not be explained in words, I drew, drew and drew, until I made it understandable. In three hours before the exams, he absorbed enough and he actually passed. This entertaining story is the reason why I write and draw the way I do. It gave me the confidence to do so. Only later did I realise that my “method” worked because of how smart that Norwegian is. The outcome, however, is identical; I started developing my own style. Now, I am bringing this story up, as I recently started reading Doughnut Economics, where I stumbled upon this interesting excerpt:

The power of pictures

Everybody’s saying it: we need a new economic story, a narrative of our shared economic future that is fit for the twenty-first century. I agree. But let’s not forget one thing: the most powerful stories throughout history have been the ones told with pictures. If we want to rewrite economics, we need to redraw its pictures too, because we stand little chance of telling a new story if we stick to the old illustrations. And if drawing new pictures sounds frivolous to you – like mere child’s play – believe me it is not. Better still, let me prove it.

From prehistoric cave paintings to the map of the London Underground, images, diagrams and charts have long been at the heart of human storytelling. The reason why is simple: our brains are wired for visuals. ‘Seeing comes before words. The child looks and recognizes before it speaks,’ wrote the media theorist John Berger in the opening lines of his 1972 classic, Ways of Seeing. Neuroscience has since confirmed the dominant role of visualisation in human cognition. Half of the nerve fibres in our brains are linked to our vision and, when our eyes are open, vision accounts for two-thirds of the electrical activity in the brain. It takes just 150 milliseconds for the brain to recognise an image and a mere 100 milliseconds more to attach a meaning to it. Although we have blind spots in both of our eyes – where the optic nerve attaches to the retina – the brain deftly steps in to create the seamless illusion of a whole.

As a result, we are born pattern-spotters, seeing faces in the clouds, ghosts in the shadows, and mythical beasts in the stars. And we learn best when there are pictures to look at. As the visual literacy expert Lynell Burmark explains, ‘unless our words, concepts and ideas are hooked onto an image, they will go in one ear, sail through the brain, and go out of the other ear. Words are processed by our short-term memory where we can only retain about seven bits of information … Images, on the other hand, go directly into long-term memory where they are indelibly etched.’ With far fewer pen strokes, and without the weight of technical language, images have immediacy – and when text and image send conflicting messages, it is the visual message that most often wins. So the old adage turns out to be true: a picture really is worth a thousand words.

[…]
Think, then, of the circles, parabolas, lines and curves that make up the core diagrams in economics – those seemingly innocuous pictures depicting what the economy is, how it moves, and what it is for. Never underestimate the power of such images: what we draw determines what we can and cannot see, what we notice and what we ignore, and so shapes all that follows. The images that we draw to describe the economy invoke the timeless truths of Euclid’s maths and Newton’s physics in their geometric simplicity. But in doing so, they slip swiftly into the back of our head, wordlessly whispering the deepest assumptions of economic theory that need never be put into words because they have been inscribed in the mind’s eye. They present a very partial picture of the economy, smoothing over economic theory’s own peculiar blind spots, enticing us to search for laws within their lines, and sending us in pursuit of false goals. What’s more, those images linger, like graffiti on the mind, long after the words have faded; they become stowaway intellectual baggage, lodged in your visual cortex without you even realising it is there. And – just like graffiti – it is very hard to remove. So if a picture is worth a thousand words then, in economics at least, we should pay a great deal more attention to the pictures that we teach, draw and learn.

Hopefully our sketches will someday form lingual patterns as well. The beauty of a language originates from its power to construct and combine thought. To deliver the message. This requires a degree of predictability, where a reader following this kind of content, for a period of time, may actually foresee and expect some of the images used in combination with the text. Even if this is not an accurate statement, however, at least it’s fun for the editor.