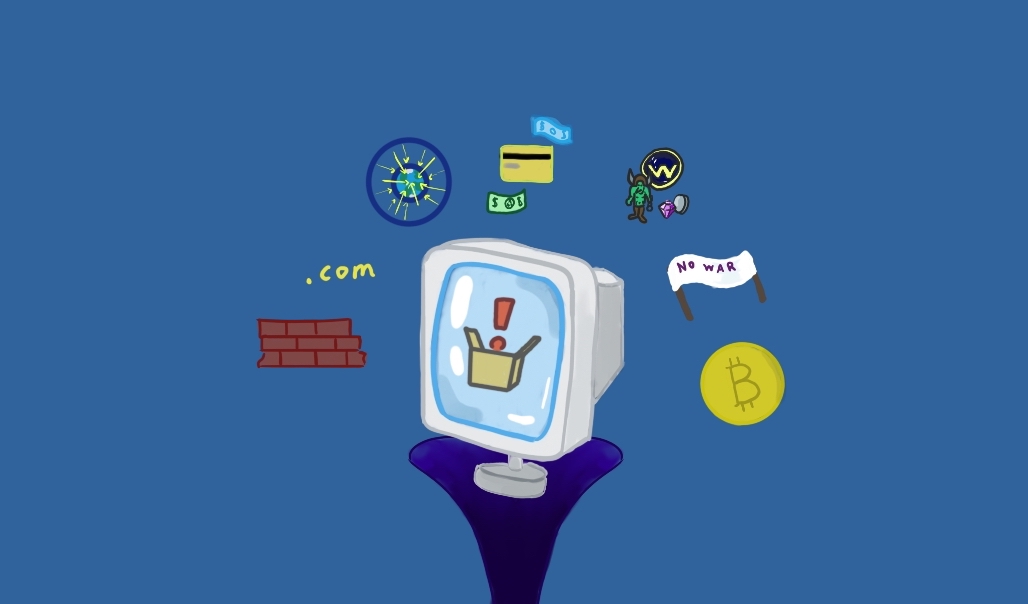 Imagine three lanes of constant change; the slow one being the biology of the human, the middle one being social affairs and the fast lane being technology. Technological improvements can potentially trigger sociopolitical change. It is rare, however, to see a large technological change coincide with an unrelated international political change – the of the Cold War and the dissolution of the USSR. Not too many years after, the Internet was already becoming mainstream. Thirty years have passed and the aforementioned changes created an exponentially larger impact over a short span. Although a text at the size of a dissertation (or more than one) is required to thoroughly analyse how we even got to the point of questioning the monetary system technologically, I would prefer to display my views and ideas in small packages.

The collapse of the USSR
As a direct consequence of Russia’s economic and (geo)political defeat, the United States of America became an uncontested power, living its Unipolar Moment. The rules of the international system became lenient, allowing the states to breathe and be more flexible regarding their foreign policy goals.

Enter the internet
If the world was still divided into two, we would probably have two competing internets instead of one. The man of the West would not be able to use a computer to check a Lithuanian website. Naturally, the two sides would compare speed and other metrics, creating an Internet race. The true power of the internet, however, is the size of its network, its neutrality (with both meanings of the word) and its power to nest information. It is well understood that the internet was allowed to be developed at the best possible Unipolar moment.

Globalisation
The doors of passports opened, allowing better freedom of movement globally, creating opportunities, links between and among individuals. More people are working abroad, living abroad and accepting goods and services from abroad. Generally speaking, daily life accelerated. Globalisation implies a feeling of shrunk spaces and distances – no event and no actor is completely irrelevant, no matter the geographic distance. The individual is more easily affected and under some circumstances may more easily affect social affairs.

E-Payment
The internet also allowed E-payments, changing the psychological relationship between the person, the money and the product. People truly feel less pain spending money when they do not see the physical banknote leaving their wallet. For the same reason, casinos use chips. People will more likely make impulsive choices betting and gambling when they are not restrained by a feeling of banknote loss.

Online Games
The optimistic vision of the modern world is not expressed by a person – it is better represented by an ecosystem. The Mass Multiple Online Role Playing Game (better known as MMORPG) is an appealing experiment; It features:
a. People of any country living in the same virtual space during some hours of the day; a revolving door.
b. They are all practically in the same place while at the same time being thousands of miles away.
c. Trade is a crucial factor.
d. People are using an in-game currency.
e. There is a parallel currency for which you pay real money. The same rules apply as they would for a casino chip.
f. There is relative anarchy. Almost everything is governed by guilds, small tribes.
g. Identities are challenged by people pretending who they want to be. Many men, for example will use a female avatar to attract attention. Some women playing these video games, on the other hand, may prefer to use a male avatar in order to avoid subtle forms of harassment. That is similar to female scholars using gender neutral names, in order to avoid discrimination when being published.

Society
Hence, as we see, people are given both flexible, as well as structured fora, where they can find people with similar interests, concerns and beliefs. This has resulted in stronger civil societies as well, creating a complex space between the government and its population. Protests and activism matter differently in the twenty-first century and groups could express disappointment in unprecedented ways.

An economic disappointment
The dollar, the strongest currency representing the strongest state globally, has suffered two dramatic blows: the termination of the Bretton Woods international monetary system and the 2008 crises. This mix gave birth to cryptocurrencies. Many individuals view cryptocurrencies as a vehicle for speculation. More and more people are looking at cryptocurrencies under an ideological prism. Having lost their faith in the central bank, owning a decentralised currency and keeping it, completely disregarding the ups and downs of its value in cash (HODLers), is a statement. These two categories are two extremes in terms of ideology. If we accept the idea of normal distribution, most people fall somewhere in between. Everybody wants to become a bit wealthier and given growing inequalities, people see it as a way to restore socioeconomic mobility.

Frankly, I do not believe the weaknesses of the conventional monetary systems were ever enough to encourage people adopt alternative currencies. In contrast, I believe that video games were a catalyst for their worldwide acceptance. It always felt like a purely digital asset could only pop out of a video game.

Decentralisation
One of the books I have recently read is “The Purpose of Power: How to Build Movements for the 21st Century” by Alicia Garza. I came across a very curious term, Decentralised Leadership:

Decentralisation means distributing leadership throughout the organisation rather than concentrating it in one place or in one person or even a few people […]
Decentralisation also has another purpose, however. It allows for an organisation – or a group of people trying to accomplish something together, if you will – to get ideas, leadership, strategy and input from more people. From that perspective, decentralisation is simply smarter: it opens your organisation to the contribution of everyone.

Decentralisation, or even better the movement towards decentralisation (because the human kind may backtrack) is a general characteristic of the current century, so far. The decentralisation of the monetary system is only one of the trends. In reality one can find it in every social science. In terms of International Relations, we are observe a shift from the bipolar international system to a multipolar one; this is also a manifestation of decentralisation, although coincidental.

In conclusion
The Internet is a powerful tool at the hands of too many actors. Nevertheless, the power of the state or the multinational corporation did not decrease at all. We witness conflicts in an arena where ideas can take a temporary form. Yet, these temporary forms may have permanent effects. Even if the internet suddenly ceased to exist, it has already changed the state of affairs. What is considered important in this article is not the blockchain or the bitcoin, as some people fanatically do. What matters is the belief that people are capable of inventing equally influential technology, limited mostly by wide social acceptance.