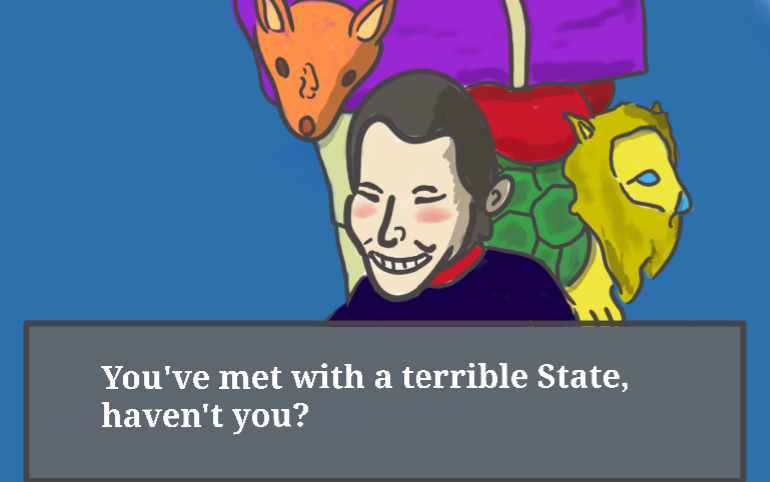 Lv 2: This post is a part of my Video Games series.

Humans have the capacity to be empathetic. Personally I am even more empathetic when it comes to a videogame character I am invested in. Regardless if you can read between the lines of world politics or not, we all have the ability to understand the feelings, the struggle, the vibes of a country’s people.  Whether we take it from a Geopolitical perspective or an International Law perspective, the population is a component of a state. Another component of the state, which expresses human will, rather than being an objective parametre such as “territory”, is the goverment, which stems from the same exact population.

Having mentioned that, understanding or empathizing with either of these components may be key to a better understanding state behaviour and timimg of decisions, despite the primary importance of the International System itself. I argue that videogames can help us understand even better and perhaps ‘feel like a state’ as opposed to ‘feeling a state’.

Do States have personalities?

Good democracies or bad dictatorships?A Third Reich seeking vengeance or Hitler’s solo career? How often do you judge a state’s behaviour by its leader’s character; even after a leader’s or a regime’s death:  a France of Napoleon’s and de Gaulle’s. And at the same time its culture, along with the stereotypes, may cultivate a national image to represent itself infernationally in a legitimate way. Is Canada a kind state because Canadians are stereotypically kind? Perhaps a better translation would be to ask whether that makes Canada more pacifistic: not necessarily. Canada has participated in or aided in recent armed conflicts. While each detail is helpful, it is best not to obsess over making things personal, when it comes to a state. There is, perhaps a thin line between humane and organizational. If something though, is organizational, it can be seen as a mechanism, something well expressed by gameplay.

The arts can help us understand human experience better than plain bullet points . Video games, as a form of art, can first and foremost help us understand the emotions of characters we play. If you act in the role of a Swiss Mercenary, you are likely to be composed and sort of distanced. Nonetheless, when pain is inflicted upon your character, the need for your virtual self preservation is awakened. You thus get a better glimpse of your identity: as you identify the enemy, as you form your threat perception.

Existing formats of gameplay can already provide a helpful context to play with. I can identify at least three types of complex subjects and forms of gameplay you can easily find.

Real Time Strategy: You are an omniscient being until the point where the fog of war limits you, and you command multiple units within an operational context. Logistics are a priority, and for best outcome and build-up of military capabilities an optimal combination of time and resources is required. Here you can play as an absolute warlord, whose chain of command is a stable and uncontested.

Turn Based games:
Turn based games are like two boxers taking turns to hit each other. Constant or fast actions are not relevant unless there is a time limit per turn taken. Composure of thought is of the essence. A subcategory, “Tactics” turn based games, includes movement, similar to a chessboard. There are quite many differences however with chess, the main ones being:
1. You can move multiple pieces  during the same turn – unless the system is set to allow the fastest piece, based on a speed variable (e.g. a soldier with light armor)
2. There are bigger quality disparities between the pieces because each have more colourful and unique abilities.
Tactics games are not that great for real life combat applications There are however two great things about Tactics games. Firstly, they allow you to understand that decision-making can often be slow. Not everything requires reflexes: what matters is a composed decision.
Secondly, Tactics games teach us well that many preparations can be made during the turns that damage cannot be inflicted – and damage cannot be easily inflicted during the absense of a warm armed conflict. An exception would be the use of hybrid techniques, such as the Stuxnet virus against the Iranian nuclear programme. Something that looks like a tactics game preparation is the placement of readily available military equipment near the border of an unfriendly neighbour state, particularly during a military excercise which usually involves flexing increased mobility of units.

Grand Strategy games:
Quality Grand Strategy games are perhaps the closest immitation of what it feels to be a state. Perhaps it is one of the closest experiences one can have to actually thinking like an institution and not simply as country leader. Europa Universalis is a personal favourite title and it proves that one must have a good grasp of public administration knowledge and economics before any engagement in conflict. Diplomatic and Economic means are highlighted as tools, while war truly seems to be an everlasting period, having a toll on the nation-states wellbeing. Geopolitics are ever-present and today’s friends could be tomorrow’s enemies. Additionally, when you choose a nation, usually you tend to replicate the historical path of its expansion: whether it is the expansion of the territory or the commercial activity and dominance. Alternative history is something that easily happens in this sandbox, with so many variables. Yet, geography will inevitably create a degree of determinism.

Which game can help you feel like the international system?

The international system is decentralized – anarchic and quite chaotic. Hence it is easier to explain the feel of the system with mechanics and dynamics, since there is no central will or management to emulate in a virtual environment. Doesn’t this also explain why we use terms like “equilibrium” and “balance of powers” in classic, plain IR theory? Perhaps it is not a game that assumes a historical context that can be of most help. Sometimes games revolving around abstract mechanisms like agar.io can tell us more.

In agar.io you are not a human. Nor an organization. You are literally a circle on a white map and you travel indefinitely in order to grow by eating smaller players, other opponents playing online who have not grown enough yet. When you eat a circle, yours becomes even bigger, much like a country expanding its territory after a victorious war. The game doesn’t have a chat and the players among themselves are mostly strangers. Yet, when one player becomes too big, the rest have a natural inclination to trust and feed each other in order to use the terrain and dethrone the hegemon. Then the spoils of war are split among the smaller circles and a new cycle of competition begins; a plain, yet accurate representation of power struggle.